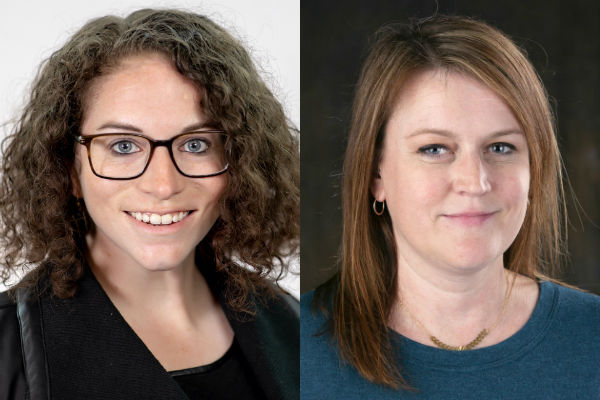 Caitlin is an investigative reporter at the Arizona Daily Star, covering sports and local government. The bulk of her sports investigative work has focused on Title IX issues within the University of Arizona athletics department. She also written extensively about the UA's role in the FBI investigation into college basketball and financial misconduct in youth sports. Schmidt started at the Star in 2014 as a breaking news and cops reporter, and is the paper's first investigative sports reporter.

What AWSM means to you?

Schmidt: AWSM has been so valuable to me since I joined 18 months ago. It's provided me with a huge network of talented female colleagues, many of whom quickly became my friends. When I became the Star's first investigative sports reporter in February 2018, I was starting from scratch and didn't have a lot of guidance. I found AWSM, applied for the Champions program, went to my first convention and everything changed. I suddenly had not just someone, but a plethora of someones to go to with questions, concerns or just to talk. The relationships I've formed through AWSM have been genuine and I know that my career is in a better place since joining.

What you hope to bring to the digital role/goals?

Schmidt: I want to be able to give back to AWSM after everything it's done for me, and joining the board seems like a great way to get more involved and do just that. As VP of digital, I hope to keep members and prospective members up-to-date through the website and email blasts with news about the organization, upcoming events and award winners. We all have fast-paced jobs, busy lives and are scattered across the country, so I want to be able to help AWSM members stay connected to all the latest happenings and important news.

Amanda is a Communications Manager for ESPN PR, handling publicity for all programming and on-air talent on SEC Network and Longhorn Network, as well as managing PR for all college baseball, gymnastics and track and field programming and talent across ESPN networks. A 12-year sports PR veteran, Amanda spent four years at USA Track & Field as the national team press officer before coming to ESPN in 2017. She was an SID for six years before her time at USATF, including two years at Vanderbilt University while in grad school and four years at the University of Florida. She has been an AWSM member since 2009.

What AWSM means to you?

Brooks: AWSM has provided me with professional growth, development and networking, all of which have helped tremendously in terms of building my career and creating professional relationships along the way. Most importantly, however, I’ve cultivated a true support system of women in the sports business. We’ve all lifted each other up and pulled each other forward as we navigate the industry. I’ve been an AWSM member since I was 23 and I can’t imagine the past decade of my career without the support of the phenomenal women of AWSM.

What you hope to bring to the membership role/goals?

Brooks: I interact with so many women in my role, whether that’s internally at ESPN or with journalists and student reporters around the country. While I mention AWSM nearly every chance I get, I’d love to increase awareness of the organization, the wide array of media roles it represents, and the resources it provides for women in all stages of their careers. I also want to improve the retention of student members following graduation. The student chapters are such a dynamic part of the AWSM experience, and the ability to keep those members as they begin their careers after college is vital.

Interested in volunteering with AWSM’s board? Email awsmboard@gmail.com for details or to express interest.