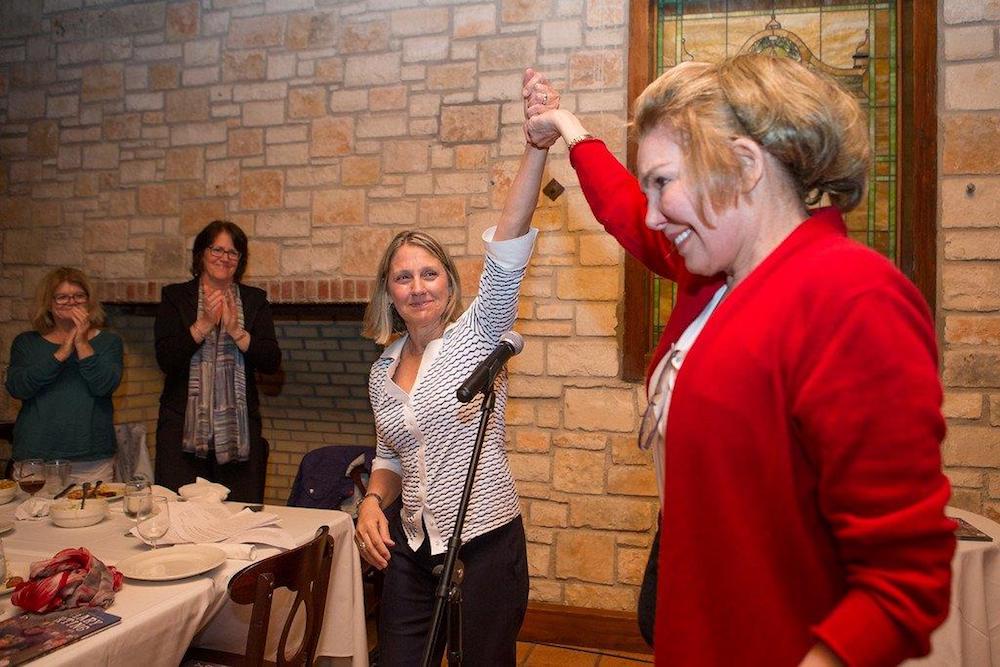 It’s ironic that Suzanne Smith won the 2017 AWSM Mary Garber Pioneer Award, because she prefers to stay comfortably out of the spotlight during a career that has spanned more than 30 years at CBS Sports. She is and remains the only woman directing NFL games at the network.

Smith hardly considers herself a pioneer, even though in reality she’s been inadvertently blazing trails her whole life. Surrounded and feted by a table of former Mary Garber Pioneer Award winners – Christine Brennan, Nancy Cooney, Linda Robertson, Melissa Ludtke and Lesley Visser – she spoke of an early childhood afternoon playing baseball with the boys. Underestimated merely because of her gender and with the defense playing in, she ripped the ball over the infield for an inside-the-park home run. Smith was just getting started.

She went on to become the first volleyball player at Temple University to receive an athletic scholarship (she also played softball for the Owls), and she is in the communication school’s Hall of Fame. She joined CBS in 1983, and when a colleague with less experience was promoted, she quickly learned to speak up. Management had assumed she was happy in her assistant director role. She made her intentions known after that.

Her first directing credit was the NCAA volleyball championships in 1988. She has since directed countless NCAA basketball tournament broadcasts and NFL games, as well as the Olympics and U.S. Open tennis championship.

During an acceptance speech filled with career anecdotes, she shared another moment where simply because of her gender, she was made to be the outsider. It was the NCAA tournament and during a pre-production interview, one of the team’s staffs refused to tape the interview while she was present – even though she was the person in charge. She stepped out of the room for the good of the broadcast.

That day was particularly important years later, when a young Jamie Erdahl was assigned to her NFL crew. Smith admitted she briefly questioned Erdahl’s age, credentials and blond hair before quickly realizing what she had to do. Smith not only welcomed but embraced the rookie NFL reporter, the new girl on the block, as only a woman who knows that struggle all to well can do. And thanks in part to Smith’s guidance, Erdahl has shined.

You learn a lot about a person from the people who are their work family. It was only fitting that Lesley Visser, the first AWSM Mary Garber Pioneer winner, introduced Smith. The pair have worked countless NCAA tournaments together. It says even more about Smith that when AWSM reached out to Erdahl back in January, Erdahl insisted on coming to the Austin, Texas, convention to surprise and support her colleague and dear friend. That’s the kind of impact Smith has made on those who know her best.

What the future holds for Smith is unclear. She could eventually be the first woman to direct a Super Bowl.

In fact, as of that Pioneer Dinner, ESPN’s Beth Mowins this fall will become the first and only woman to call an NFL game in 30 years. Only time will tell if Smith will get her shot on football’s biggest stage, but one thing is for sure: When and if that phone call comes, like so many times before, Suzanne Smith will be ready.