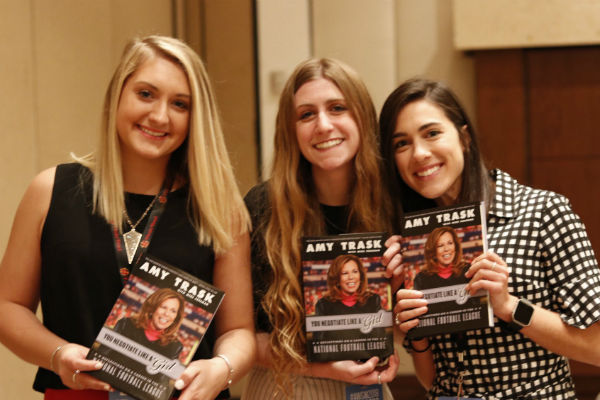 Amy Trask encourages "to thine own self be true"

Amy Trask had one directive for those attending the annual convention for the Association for Women in Sports Media in Scottsdale, Ariz. — to thine own self be true.

Trask, chairwoman of the BIG3 Basketball League – the three-on-three league featuring mostly retired NBA players -- offered advice and lessons from her 35-year sports-industry career before departing for Houston to catch the opening tipoff for its second season.

After starting with the then-Los Angeles Raiders as a legal intern in 1983, Trask climbed the ladder to become its CEO in 1997. She served as the right-hand woman to Hall of Fame legend Al Davis. Trask was dubbed “The Princess of Darkness,” a moniker that appeared in a Sports Illustrated article by an anonymous league source that was not intended to be complimentary but was nonetheless embraced by loyal Raiders fans as a term of endearment.

After resigning as the Raiders’ CEO in 2013, Trask became an analyst for CBS Sports and authored her memoir, You Negotiate Like A Girl, which was gifted to every attendee at Friday’s keynote speech.

As the first female executive in NFL history, Trask explained that she often faced questioning from men who felt she didn’t deserve be in the same room. She shared one story that occurred during a practice early in her career. A media representative asked Hall of Famer Gene Upshaw what it was like to “have a girl” on the team.

That story, Trask said, represented everything that she hopes for women in sports to achieve. She said the final step of overcoming the sexism facing many women in sports media is the ability to be treated without regard to gender.

To achieve this level of success, Trask shared three pieces of advice for other women looking to continue in her stead.

First, stop thinking about the fact that you are a woman. Trask called it “nonsensical” for a woman to look at her life through a gendered lens if she is hoping for others to do the opposite. Instead, she told women not to expect the worst and to approach every situation with the expectation that those around them think they are capable, even if untrue.

Second, she tells women something that she acknowledged might seem obvious — work hard.

“Work really, really hard, and when you think you can’t possibly work any harder, find a way to work harder,” Trask said. “People have come to me and asked how I’ve achieved what I’ve achieved, and I’ll say to them, ‘Do you notice when you get to work in the morning, my car’s already here? And when you leave at night, my car is still here?’ Hard work matters.”

Finally, Trask returned to her mantra — to thine own self be true. She said that there were many ways to stand out, through hard work and dedication and sacrifice. At the end of the day, however, Trask said there’s no substitute for individuality.

“Whatever it is I may have accomplished, those things that I consider my greatest accomplishments have been when I have been true to myself,” Trask said. “I was myself and it served me well. Everybody defines what works best for themselves.”