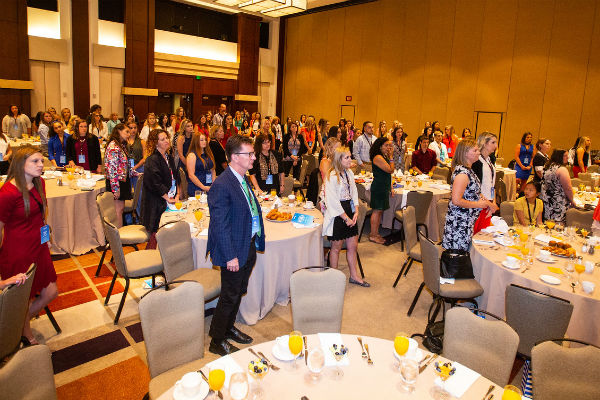 Julia Wallace posed a series of questions on Friday morning at the 2018 AWSM annual convention.

Wallace asked everyone who raised their hand to stand. Every person in the room of more than 160 people stood.

“It’s 2018,” said Wallace, who was the first female editor-in-chief of the Atlanta Journal-Constitution and serves as the Frank Russell Chair for the Business of Journalism at Arizona State’s Cronkite School. “We shouldn’t be standing. #MeToo is an important moment where women are telling their stories and saying, ‘Enough is enough.’ And we all need to do that.”

Wallace was part of a panel discussion about workplace harassment and the #MeToo movement moderated by ASU/Cronkite professor of practice and former Arizona Republic sports columnist Paola Boivin. Mi-Ai Parrish, the Sue Clark-Johnson Professor in Media Innovation and Leadership at ASU/Cronkite who was the first female publisher at the Kansas City Star, and Steve Zansberg, a partner at the law firm Ballard Spahr, also were part of the panel.

The panel shared their experiences and ways in which to fight sexual harassment.

Zansberg shared a recommended list of actions that women can take if they’ve been or are currently being harassed. The first thing to do is say, “No. Stop it.” From the start, he said to document what happens. Print out texts or emails that show the harassment. Confide in colleagues as well as the company.

“You can also report it to the Equal Employment Opportunity Commission or the state agency,” Zansberg said. “You can’t be lawfully retaliated against for filing a complaint. Then, the last advice is to get out. If you’ve done all of these things and they’re not fixed, then think about leaving the company.”

The panel also mentioned social media and the impact it has had on their work. While the platform has been crucial for information-gathering and a way to bring people together, it has also been a dark, mean place, ripe with harassment. The panel gave advice and resources on how to rise above social harassment.

“It’s really hard to read the crap that’s been written about you,” said Parrish, who recently faced a cyber-stalker in court. “It’s incredibly taxing. Fighting back is a thing that’s really important and very liberating. It does not make me weak, it makes me strong.”

When harassment happens -- in the office, on the field, in the locker room -- reaching out to others is paramount. All four speakers -- and people in the audience, including USA Today sports columnist Christine Brennen -- reiterated that.

“If at the very least, if that’s happening to you, come to us,” Brennen said. “Talk to AWSM. I would be happy to hear that story and take it to another level. We’re here for you guys. That’s the whole point of AWSM.”

Sharing stories, Wallace said, is how progress is made so that in 20 years, when those questions are asked again, no one will stand.