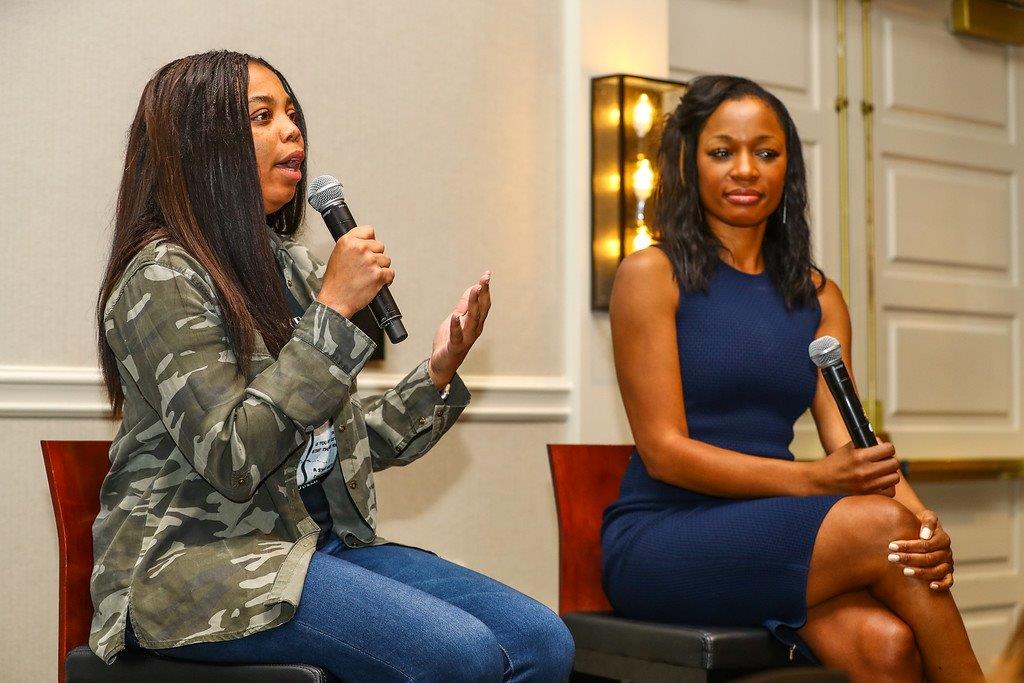 When it comes to being authentic, Cari Champion and Jemele Hill know exactly how to do just that, whether on the airwaves of ESPN or online in the Twittersphere. It was no different when the two “SportsCenter” anchors spoke at the Association for Women in Sports Media’s 2017 convention in Austin, Texas.

“You can plan out your life, but it never turns out the way you want to,” Champion said as the two reflected on their very different career paths to ESPN.

“People ask me all the time today about ‘how you get into working in television,’ and I don’t know because I’m still not sure how it happened for me,” Hill said, joking.

Working in TV was never a goal of Hill’s. Instead, she had always dreamed of one day working for Sports Illustrated, and she spent the majority of her career in print journalism. Stops for Hill included The News & Observer in Raleigh, N.C. and the Detroit Free Press before she headed to the Orlando Sentinel, where writing columns for the first time really helped her find her voice.

“I was terrible my first year,” Hill confessed. “I didn’t know how to construct a column. I had a great editor and sports editor who worked with me and took the time to nurture me. They got me to relax and realize the best columns are still well-reported. Over time, I eventually grew into my own voice.”

The voice she found and was putting into her columns is what eventually led to Hill applying for a job at ESPN.com, which then turned into rotational appearances on shows such as “Cold Pizza,” “Around the Horn” and “First Take.” That was also where she met her current SC6 co-anchor, Michael Smith, who joined forces with Hill on the “His & Hers” podcast back in 2013. They have been a duo at ESPN ever since.

For Champion, her career goal had never been to work in sports television. Instead, she always thought she would one day report from the White House lawn. While working at WPTV-TV in West Palm Beach, Florida, the same city where Venus and Serena Williams grew up, Champion fell in love with the game of tennis. Several years down the road, while working at the Tennis Channel, she realized she might have a chance for a career in sports broadcast journalism.

That trust came in the form of Champion going out on her own and finding one person at ESPN willing to meet with her, a person she was able to sell her skills and abilities to. She kept in touch, hoping for just a simple freelance gig, but to her surprise, a short time later she was offered the chance to audition to be the host of “First Take.”

“I was happy, but I was surprised,” Champion recalled when discussing how she got the job offer. “There were no black women Monday through Friday working at ESPN in a studio, especially on a highly rated show like ‘First Take,’ so it was a big deal.”

Hill recalled having a similar reaction to Champion’s job offer.

“I was just as surprised as anyone that it did go to a woman of color because I did not expect that,” Hill said. “I knew her getting the job was so significant and was something good for all of us because if she kills it every day, then they’re much more likely to put the next woman of color that comes through in a high-profile position. If you see somebody that’s a peer or someone else get elevated, that means good things for you too because that means they’re that much more likely to give someone like them, like us, a chance.”

Hill recalled that, shortly after realizing the importance of having another African-American woman at the network and on television, she sent Champion an email to offer advice and to connect. After a few communicational technical difficulties, the pair finally connected at ESPN, and they have had each other’s back ever since.

“It is imperative that you do that,” Champion said. “We [women] have to support each other. There was a narrative being created that her and I were in competition because she didn’t get the gig. We worked really hard at killing that narrative because people love to pit us against one another. A lot of me finding my voice and having a voice and being respected at ESPN had to do with how she supported me. I’m very grateful to her for that.”

For both Champion and Hill, though, working in television always comes back to the basics: writing.

“I know how to write. I implore that to everyone in this room. No matter what you do in front of the camera or behind the scenes, know how to write. The difference for every great journalist is that you know how to report, you know how to ask questions and think critically,” Champion said. “Jemele always says this, but I think it’s so very important, but always be extremely curious about your craft. A lot of what we’ve experienced in our careers is a combination of determination, luck and always being prepared for opportunities.”

Said Hill, “I echo that message: Please learn how to write. We write all our own stuff. You never know when that opportunity is going to strike, so you have to be the most prepared you can be once it does happen. People didn’t put me on TV because I’ve got jokes; they put me on TV because my resume gave me authority and credibility. That is what writing gets you.