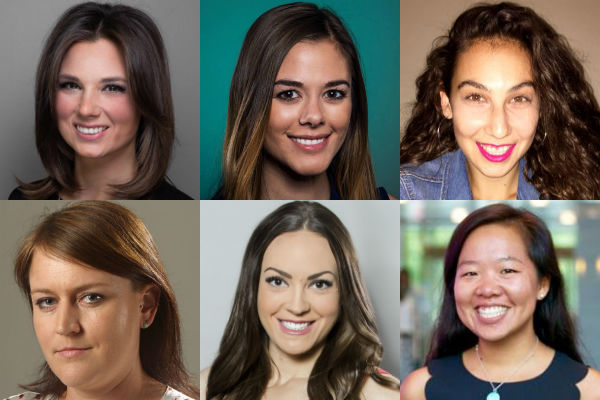 The Association for Women in Sports Media is pleased to announce its 2018-19 AWSM Champions class:

Dorian Craft is a multimedia journalist with MediaSource in Columbus, Ohio. She also works as an analyst on SEC Network softball games. Craft’s previous stops include working as weekend sports anchor/reporter at WLEX-TV (Lexington, KY) and as sports director at WHAG-TV (Hagerstown, MD). She is a graduate of Virginia Tech (B.A.) and George Washington (M.A).

Alicia DelGallo is editor of ProSoccerUSA.com – a new website covering Major League Soccer, operated by the Orlando Sentinel. A former Sentinel sports reporter, she previously worked as a sports reporter/producer at The Villages (Fla.) Media. DelGallo is a graduate of the University of Central Florida.

Mirin Fader is a Los Angeles-based writer with Bleacher Report. Fader previously worked as a sports reporter at the Orange County Register in Santa Ana, Calif. She has been a contributing writer for a number of outlets including espnW and SB Nation. Fader is a graduate of Occidental College.

Caitlin Schmidt is an investigative reporter at the Arizona Daily Star in Tucson, Ariz., where she has worked since graduating from the University of Arizona.

Erin Summers is a sideline reporter/production manager with 7 Communications in Raleigh, N.C. She also works as video operations director with the Coastal Plain League. Summers’ previous stops include as a sports multimedia journalist at Time Warner Cable News and WRAL-TV (Raleigh, N.C.). She is a graduate of the University of North Carolina.

Nicole Yang is a digital sports writer at the Boston Globe, where she has worked since completing an internship with Monster after graduation from Amherst College.

AWSM Champions matches professional members with sports media veterans for one year. In addition to the mentorship pairings and communication, AWSM sets up conference calls and in-person sessions with a variety of industry veterans. The first speaker for the 2018-19 AWSM Champions class will be USA Today columnist Christine Brennan – who will meet with the group over breakfast next month during AWSM’s summer conference in Scottsdale, Ariz.

“We are thrilled to expand AWSM Champions this year – increasing the number of individuals accepted into the program and adding more speakers,” AWSM board chair Lydia Craver said. “Whether it’s helping to guide a path, share experiences, build confidence or just provide a spark – mentors can have a tremendous impact in one’s life. AWSM is excited to facilitate the establishment of valuable relationships among its professional members.”

AWSM also thanks veteran broadcaster Ann Liguori, the inaugural benefactor of AWSM Champions, who also will serve as a speaker for the group during the upcoming year.

Applications for the next AWSM Champions class will be accepted in the spring of 2019. The program is open to professional AWSM members who are employed in sports media roles. For more information contact AWSM board members Gina Mizell or Iliana Limón Romero.