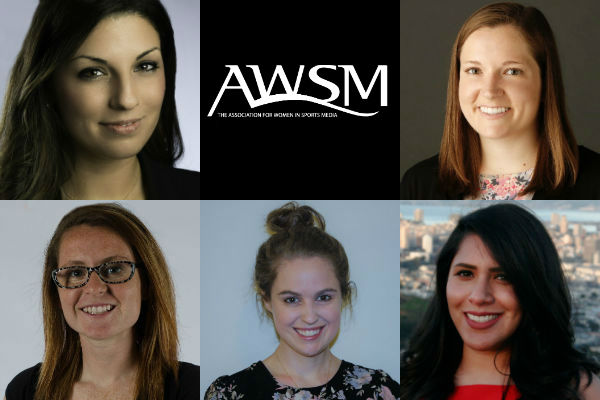 The Association for Women in Sports Media is pleased to announce its 2019-20 AWSM Champions class:

Despina Barton is an anchor and video journalist for Spectrum News 13 in Orlando. She was previously a production assistant for Fox Sports Florida and Ivanhoe Broadcast News, Inc. She is a graduate of the University of Central Florida.

Callie Caplan is a sports reporter for The Dallas Morning News, where she is the Dallas Mavericks backup beat reporter and also covers preps. She is a former AWSM Scholar and has interned at USA Today, The Washington Post and The Baltimore Sun. She is a graduate of the University of Maryland.

Amie Just is a sports reporter for the New Orleans Times-Picayune, covering LSU football, basketball and gymnastics. She previously covered the University of Montana for The Missoulian. She is a graduate of the University of Kansas.

Grace Raynor covers Clemson football for The Athletic. She previously covered the same beat for The Charleston Post and Courier. She is a former AWSM Scholar and associate reporter at MLB.com, covering the Texas Rangers and New York Yankees. She is a graduate of the University of North Carolina.

AWSM Champions match professional members with sports media veterans for one year. Additionally, AWSM sets up conference calls and in-person sessions with a variety of industry veterans. The Champions are provided assistance to attend AWSM's national convention at the conclusion of the program.

"We are so thrilled to introduce this year's group of AWSM Champions and mentors," said Gina Mizell, AWSM VP / Professional Programming. "This program embodies everything AWSM is about -- support, guidance and community among women in sports media. We know the mentees and mentors will benefit from their year in this program."

AWSM thanks veteran broadcaster Ann Liguori, the inaugural benefactor of AWSM Champions, who also will serve as a speaker for the group during the upcoming year.

Applications for the next AWSM Champions class will be accepted in the spring of 2020. The program is open to professional AWSM members who are employed in sports media roles. For more information, contact AWSM board members Gina Mizell or Iliana Limón Romero.