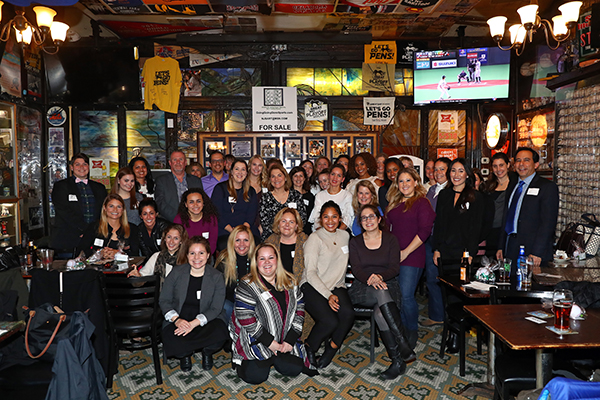 The Association for Women in Sports Media capped off its 2017 regional events schedule with November outings in New York and Phoenix.

On November 7, members and supporters met at Foley’s in midtown Manhattan for a networking reception and panel.

Some key points made by the speakers included:

Stone: “Treat everyone with respect. I immediately judge the talent on how they treat the runners. They should be given the same level of respect as the bosses. Everyone matters. … “(Starting out), I wish I would have been a better colleague to those around me because I think it set me back from getting a promotion earlier. I wish I had cared more about those around me.”

Stone: “Find a mentor, someone you trust that you can go to and is there for you. Also, be a mentor.”

Tirado: “I wish I had said ‘yes’ more earlier in my career and been more open to things instead of thinking about why I couldn’t do something.”

Tirado: “It’s a tough road. We have a long ways to go. There will be bumps but if you build your relationships and work hard, you’ll get there. You want to be the person who delivers and, if you can be that – it will pay dividends.”

Tirado: “It’s unfair to ask women or men about work/life balance. There will be ups and downs. We need to get to a point where we accept there won’t always be balance. We need to accept imbalance.”

AWSM thanks Major League Baseball for its sponsorship of the New York event.

On November 19, members and supporters met at Talking Stick Arena in Phoenix for the Phoenix Suns-Chicago Bulls game.

Before the game, attendees participated in a Q&A session with longtime Fox Sports Arizona broadcaster Jody Jackson. Jackson, who has worked in the market nearly 20 years and is regarded as the most visible female sportscaster in Arizona history, spoke about getting her start in the business and the importance of supporting women in the industry.

AWSM thanks Fox Sports Arizona for its sponsorship of the Phoenix event.