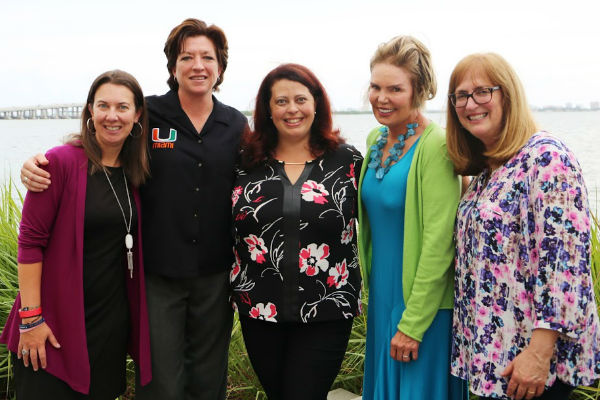 While SEC media days were going on at the College Football Hall of Fame, AWSM held a July 17 event at Fado Pub in midtown Atlanta. The gathering brought together members and supporters to network as well as learn from dynamic voices in the industry.

Many members and nonmembers were in attendance, including current AWSM Scholar winner Isabel Miller, who was in the midst of completing her internship with CNN Sports in Atlanta.

AWSM partnered with WISE South Florida (Women in Sports and Events) for a mixer in midtown Miami. New hotspot Amara at Paraiso played host to a networking hour overlooking Biscayne Bay, followed by a panel on women in Miami sports. AWSM’s first Mary Garber Pioneer Award winner and Hall of Fame sports broadcaster Lesley Visser opened the evening. Visser shared her experiences as a trailblazer and as a woman in sports, her ties to AWSM, and the importance of having a support network.

Coming up Oct. 17 from 4 to 6 p.m. at the First Amendment Center at Vanderbilt, AWSM will welcome featured speakers Laura Okmin and Sara Walsh. Okmin is the founder of GALvanize and a longtime NFL sideline reporter for Fox Sports. Walsh is a veteran sports anchor, most recently with ESPN. RSVP by Oct. 12 to awsmevents@gmail.com.