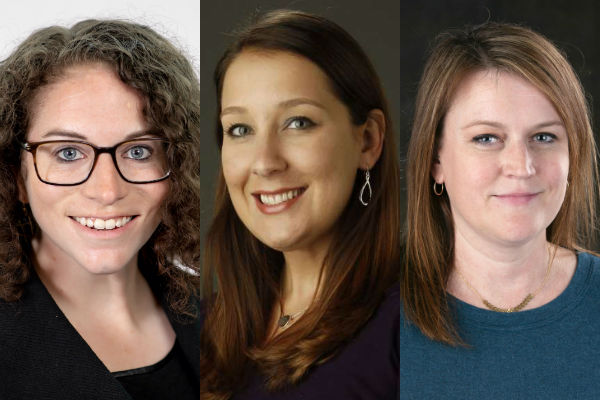 Brooks was elected VP/membership on Sept. 1, replacing Rachel Lenzi, who has served on AWSM's board for the past five years. Brooks is a Communications Manager for ESPN PR, handling publicity for all programming and on-air talent on SEC Network and Longhorn Network. She also manages PR for all college baseball, gymnastics and track and field programming and talent across ESPN networks. A 12-year sports PR veteran, Brooks spent four years at USA Track & Field as the national team press officer before coming to ESPN in 2017. She was an SID for six years before her time at USATF, including two years at Vanderbilt University while in grad school and four years at the University of Florida. She has been an AWSM member since 2009.

Schmidt was also elected on Sept. 1 to fill the VP/digital role that was vacated after current AWSM president Ashley Colley transitioned to her new role. Schmidt is an investigative reporter at the Arizona Daily Star, covering sports and local government. The bulk of her sports investigative work has focused on Title IX issues within the University of Arizona athletics department. She has also written extensively about the UA's role in the FBI investigation into college basketball and financial misconduct in youth sports. Schmidt started at the Star in 2014 as a breaking news and cops reporter and is the paper's first investigative sports reporter.

"We are thrilled to welcome Amanda and Caitlin to the board. Their willingness to always help other members and continuous involvement at our regional events or convention is something I have always noticed. I am excited to have them both take their involvement in the organization to the next level by joining the board at the VP level," Colley said. "They both also bring unique perspectives to the group from Brooks' helping with student chapters and Schmidt being a member of our 2018-19 AWSM Champions. I am confident both will contribute ideas to many areas outside of their specific assignments to the group."

Dial Creech has returned to the board, this time taking on the role as treasurer. She began her term on Sept. 1, replacing Chloe Ferrarone, who has filled the role for the past two years. Dial Creech is a columnist for the Houston Chronicle and served as AWSM’s president from 2016-2018. In that role, she helped to streamline AWSM’s financial affairs and served as the group’s primary spokesperson, playing a key role in fundraising as well as the coordination of AWSM’s 30th anniversary convention.

"Jenny is a great asset to have back on the board in the treasurer role. Her immense knowledge of the group and past experience as president who has dealt with our finances before will be very valuable to have in this role for the next year," Colley said.

"People are always surprised to learn that AWSM board's is completely volunteer-based, and that dedication could not be exemplified more than in Rachel Lenzi and Chloe Ferrarone. AWSM is better for having both a part of our executive leadership team," AWSM board chair Kelly Burke said. "Rachel has been a long-time board member who brought enthusiasm, empathy and innumerable contributions during her AWSM tenure. She's become a close friend and someone I will always champion. Chloe embraced the treasurer role. We are grateful for her organization, thoroughness and commitment to our values. Chloe is beloved within AWSM, and we know she'll thrive in her new job outside of sports. We thank both Chloe and Rachel for their service, friendship and leadership."

Interested in getting involved with AWSM? Opportunities to assist at the coordinator level or on special projects are available in areas such as digital and fundraising. Email awsmboard@gmail.com for more information.