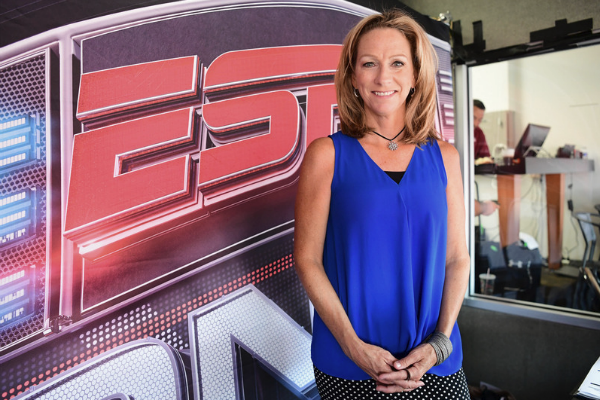 Beth Mowins to kick off #AWSM2018 in Arizona

Pioneering broadcaster Beth Mowins will serve as the opening night speaker for the Association for Women in Sports Media’s summer conference, set for June 21-24 at the Hyatt Regency Scottsdale Resort & Spa in Arizona.

“We are thrilled to have Beth open our 2018 conference,” AWSM president Jenny Dial Creech said. “She has paved the way for so many women throughout her broadcast career and brings a world of knowledge and experience to the table. She’s a terrific representation of what the Association for Women in Sports Media is all about.”

Mowins will speak at the opening night reception, scheduled for Thursday, June 21.

Since joining ESPN in 1994, Mowins has called NCAA championships in women’s basketball, softball, soccer and volleyball. She has been the voice of the Women’s College World Series for more than 20 years and began calling college football for ESPN in 2005. Mowins also is a staple on ESPN’s regular-season men’s and women’s basketball broadcasts.

In addition to her NFL assignment for ESPN, Mowins worked four NFL games for CBS Sports during the 2017 season, and she has been the play-by-play voice for Oakland Raiders preseason games since 2015.

Amy Trask, the first female CEO of an NFL team (Oakland Raiders) who serves as an analyst with CBS Sports and as CEO of the BIG3 basketball league, was previously announced as the keynote speaker for Friday, June 22. Stay tuned for an additional keynote speaker announcement!

Thanks to our sponsors

AWSM thanks the sponsors of its 2018 conference – led by ESPN and MLB, which have both supported the organization’s events annually for more than a decade.