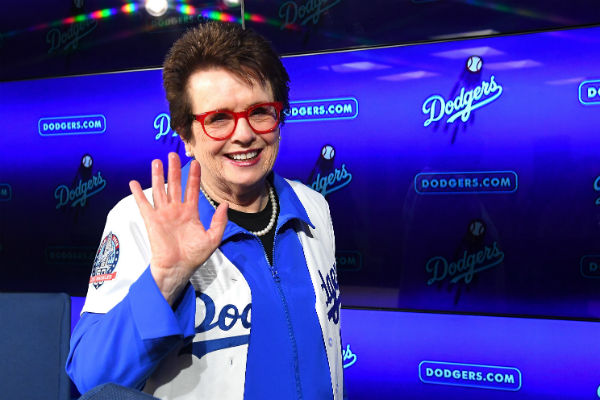 Billie Jean King is a trailblazer in women’s tennis and a pioneer for women’s sports. Now, she has an ownership stake in a major-league baseball team. King and her partner, Ilana Kloss, became new minority owners of the Los Angeles Dodgers in October.

According to the Los Angeles Times, King and Kloss will join the Guggenheim Baseball Management Group. Pending WNBA approval, they will also become part of the ownership group of the Los Angeles Sparks, which is also run by Guggenheim. King founded the Women’s Sports Foundation in 1974. She also founded the Billie Jean King Leadership Foundation, which advocates for diversity in the workforce, and owns the Philadelphia Freedoms of World TeamTennis.

“The thing I love about the Dodgers is that they’re concerned with inclusion and they want to do good,’’ King told the Times in October. “It’s so good to have different voices, different cultures, more ideas, better ideas.”

Danielle Allentuck, who helped found the AWSM student chapter at Ithaca (N.Y.) College, will cover the World University Games in March in Krasnoyarsk, Russia. Allentuck is one of six college students from around the world who will participate in the Winter Universidade Young Reporters program.

Jori Epstein has joined USA Today, where she will cover the Dallas Cowboys of the NFL. She previously covered the Cowboys for the Dallas Morning News.

Emily Horos has joined the Arizona Republic as an assistant sports editor, where she will oversee college athletics, WNBA and NHL coverage. She was previously sports editor at the Aberdeen (S.D.) American News.

Chantel Jennings, who covers college football for The Athletic, has been included in the Best American Sports Writing of 2018 for her piece on former Washington wide receiver Dante Pettis and his love of reading. Jennings went with Pettis to his favorite bookstore, describing it as “essentially, a dream assignment for me — talking about football and authors.”

Kara Keating will serve as the sports editor for The State News, Michigan State University's independent paper, for the spring. This is the first time a female has held this position in 15 years.

Lauren Kirschman has joined the Tacoma News-Tribune, where she covers the University of Washington football program. Kirschman previously worked at PennLive.com in Pittsburgh.

Andrea Kremer teamed up with Hannah Storm on Amazon’s live stream of Thursday Night Football to become the first female tandem to call NFL games. Kremer and Storm are providing commentary and analysis for 11 Thursday Night Football games. Kremer is the chief correspondent for NFL Network and a correspondent for "Real Sports with Bryant Gumbel" on HBO.

Maddie Lee has joined The Oklahoman, where she will cover the NBA’s Oklahoma City Thunder. She previously covered Ole Miss football for the Jackson (Miss.) Citizen-Patriot.

Kimberley Martin has joined Yahoo! Sports as a senior NFL reporter. Martin was previously at the Washington Post, where she covered the NFL and the Washington Redskins.

Jane McManus joins Marist College as director of the Center for Sports Communication. McManus previously worked for ESPN and has been an adjunct professor at the Columbia Graduate School of Journalism.

Jessica Mendoza has signed a multi-year extension with ESPN to continue to be a Major League Baseball analyst for the network. She made history in 2015 when she became the first woman to serve as a national television analyst for MLB games. 2019 will mark Mendoza's 4th full season of Sunday Night Baseball.

Gina Mizell joined The Athletic Phoenix in October to cover the Phoenix Suns. She spent the last year covering the Denver Nuggets for the Denver Post. Mizell is an AWSM board member and a former AWSM internship/scholarship winner.

Amy Moritz joined Kevin Guest House in October as a development associate. Moritz plans events and works in development for the organization, which houses individuals, families and caregivers as they undergo treatment at hospitals in Buffalo. Moritz was previously a sports reporter at The Buffalo News, and she is a former AWSM president.

Kelly Schultz is in her first season as a play-by-play announcer for the Minnesota Whitecaps of the National Women’s Hockey League. Schultz is also the voice of Bemidji (Minn.) State women's hockey on the Beaver Radio Network.

***
Hannah Withiam joined the Athletic New York as an associate editor. She oversees staff writers on the New York and Buffalo teams. Withiam also writes features for The Athletic. She was previously at the New York Post.