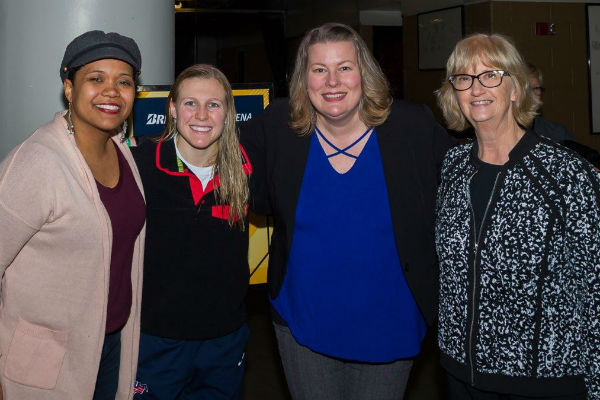 Ayala and Ross commentated the NWHL skills competition Saturday at the Ford Ice Center. Schultz joined the team Sunday at Bridgestone Arena in front of a crowd of 6,120 fans and nearly 500,000 online viewers.

Ayala, who teams with Ross as analysts for the Connecticut Whale and the Metropolitan Riveters, is the only person of color currently on an NWHL broadcast. Ayala recently wrote about her work as a hockey broadcaster in ESPNW.

“It was so empowering to work with an incredible cast of women at the 2019 NWHL All Star Game!” said Schultz, a former AWSM board member who is a radio analyst for the NWHL’s Minnesota Whitecaps and the Bemidji State women’s hockey team. “It was also inspiring to be surrounded by men who support the sport I love and the women who play it! Us three women made history that day.”

Schultz also received the Kwame McDonald Media Award at the 33rd annual Minnesota Girls and Women in Sports Day on Feb. 6 in St. Paul, Minn. The award recognizes members of the media who have supported and promoted girls’ and women's sports.

“It is such an honor to be selected for this fellowship — I still have to pinch myself to make sure this is real!” Allentuck said. “It's always been a dream of mine to work for a major newspaper and I can't wait to get started after graduation.”

Allentuck graduates from Ithaca College this spring. She is president of Ithaca’s AWSM chapter.

Softball America, the sister publication to Baseball America, officially launched on Feb. 7, with the help of editor Maren Angus. Angus, a Middle Tennessee graduate, joined the company in November 2018.  She previously ran her own website, Behind the Plate Softball, and wrote for Fastpitch News. SA is currently looking for interns and freelance contributors for collegiate and National Pro Fastpitch (NPF) coverage this year. Email her a copy of your resume and writing samples at maren.angus@softballamerica.com if interested.

Rachel Bowers and Emma Span have been selected to the 2019 Poynter Leadership Academy for Women in Digital Media. Bowers is an assistant sports editor at the Boston Globe. Span is managing editor of The Athletic MLB.

Bowers and Span are two of 90 women selected to the program, which will host three classes of 30 women each this year.

Anne Delaney joined the Greeley (Colo.) Tribune in December as a sports reporter. Delaney was previously a news reporter at the Pensacola (Fla.) News-Journal for two years.

Fuhriman, who was a member of the AWSM student chapter at Oregon, graduated in the spring and is the media contact for the gymnastics and beach volleyball teams at Boise State.

Tommy Gallagher joined WGRZ-TV, the NBC affiliate in Buffalo, N.Y., as a digital content producer in January. Gallagher was previously a web editor/sports copy editor at The Blade in Toledo, Ohio, for six and a half years.

Chelsea Janes will cover the 2020 presidential campaign for The Washington Post. She previously covered the Washington Nationals for four years. Janes is a 2012 AWSM internship/scholarship recipient.

Jenifer Langosch will move to the editorial management side of MLB.com after covering the Pittsburgh Pirates and St. Louis Cardinals.

“My fingerprints will still be on our baseball coverage, and I’ll also have the chance to mentor other talented journalists in our company,” Langosch wrote on Twitter. “The opportunity has me re-energized, and I am grateful for it.”

Stefanie Loh became the features editor at the Seattle Times in January, after 3 1/2 years working in the Times sports department, where she covered college athletics and was an assistant sports editor. Loh is a former AWSM president and former Football Writers Association of America president.

Caitlin Schmidt has received a travel grant from the Solutions Journalism Network #MeToo fund to report on Title IX in athletic departments outside of Arizona. She will visit colleges and universities that saw a decrease in incidents of violence against women in recent years.

“UK is hoping to start a sports journalism major and the idea of helping shape future journalists at a place where I grew up was too awesome to pass up,” Smith wrote in a Twitter post on Jan. 2.

Christina Tapper, who recently left her post as a managing editor at Bleacher Report, was recently selected to participate in the first class of Take The Lead's 50 Women Can Change the World in Journalism program. As one of the 50 women chosen for the three-month program focused on female leaders in journalism, Christina will receive cohort-based support, tools and resources to help transform and grow journalism.

At Bleacher Report, Christina helped launch the award-winning digital multiplatform sports and culture magazine B/R Mag. Her work at Bleacher Report was recognized by Folio, which honored her with a 2018 Top Women in Media award last year. Christina is currently taking a brief sabbatical.

Lindsey Wisniewski relocated to Portland, Ore., in the fall and joined NBC Sports Northwest as a multiplatform coordinator, where she works on coverage of the NBA’s Portland Trail Blazers as well as other college and professional teams in Oregon and Washington.