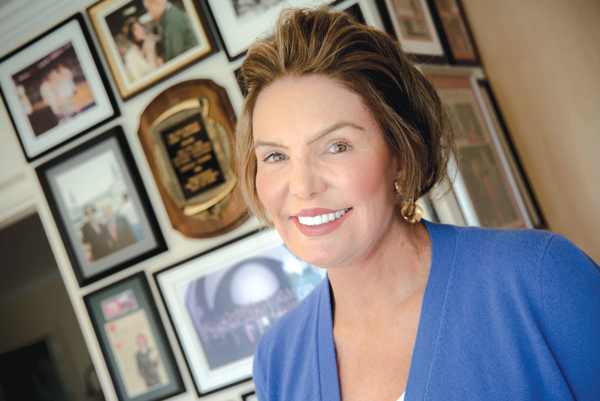 Lesley Visser was inducted into the Sports Broadcasting Hall of Fame at a Dec. 12 ceremony at the New York Hilton. A pioneer in sports broadcasting, Visser is the only woman to be recognized by the Pro Football Hall of Fame as a recipient of the Pete Rozelle Radio and Television Award. A founding member of AWSM, she also was the first female NFL analyst on TV. Visser works for CBS Sports.

Linda Rheinstein also was inducted as part of this year’s class. She was the first female graphics operator in the industry and a leader in live graphics, postproduction and special effects during the 1970s and ’80s. In the 1990s, she helped Fox Sports create its initial graphic look.

Paola Boivin, a sports columnist who worked for the Arizona Republic for more than 20 years, became the first female journalist to be enshrined in the Arizona Sports Hall of Fame. She teaches in the Walter Cronkite School of Journalism and Mass Communication’s growing sports journalism programs.

Claire Smith, an ESPN editor who previously worked for the Philadelphia Inquirer, The New York Times and the Hartford Courant, had a whirlwind fall after being honored with a prestigious award at the Baseball Hall of Fame in Cooperstown, N.Y. She received the J.G. Taylor Spink Award “for meritorious contributions to baseball writing” voted on by the Baseball Writers’ Association of America as part of the National Baseball Hall of Fame induction weekend in late July.

Then Smith, the first woman and first African-American to work a regular beat in the majors, was honored at numerous ballparks. She said her favorite part of the adventure was being able to have many members of her extended family together and also having treasured baseball friends show up in Cooperstown. She said she particularly enjoyed time spent with her son, Joshua, 30, and being honored at a New York Yankees game, escorted onto the field by Willie Randolph. “My first day as a beat writer was not in the stadium but covering that team,” she said. “It was just wonderful concentric circles, if you will, looking up at that press box knowing there were writings from that 35-year journey.”

She said among the things she learned was that Sandy Koufax, one of her heroes, went to Cooperstown for her speech. “I was literally speechless because here is the hero of my lifetime. It’s Jackie (Robinson), and then it’s Sandy Koufax, and he said he came to Cooperstown to hear my speech. … I will cherish that friendship forever. If you dream of meeting one of your lifelong heroes and he or she is everything you hoped for and more, that’s Sandy Koufax for me.”

Along with the high points came sadness, too. She had lost big brother Bill at the start of July, and after the Cooperstown, she lost dear friend Don Baylor, who she said was like a big brother to her. “The summer was incredible – the highest highs I’d ever experienced personally and professionally. I never had my family around me in such a surrounding, such celebration,” she said. “But it also had heartbreaking moments that will always be with me. So it’s a lot to absorb. I’m still trying to do that.”

She has been keeping her attention on baseball through Hall of Fame voting, but the Modern Era committee did not select Steve Garvey, a Smith favorite. As a player, Garvey ensured Smith received quotes when other players objected to her presence in the San Diego Padres locker room.

Shannon Scovel, a 2017 American University graduate and a 2016 AWSM internship/scholarship recipient, completed an internship at Yahoo Sports in August and headed for the United Kingdom to pursue a masters in Gender Studies at the University of Stirling as a Fulbright postgraduate student. She will evaluate the media coverage of women in the 2008, 2012 and 2016 Olympics, building on her undergraduate thesis on a similar topic. She competed as an triathlete for Team USA in London at the 2013 Triathlon World Championships. She hopes to pursue a career in academia.

Amanda Brooks, an AWSM member since 2009, has joined ESPN’s public relations department after four years as a marketing and communications manager at USA Track & Field. Brooks will serve as the spokeswoman and PR contact for ESPN’s College Networks, including the SEC Network and Longhorn Network. In her previous role, Brooks traveled with USATF’s national teams, acting as the team’s press officer and spokeswoman for the Rio Olympic Games and various IAAF Championship events.

Hannah Burton joined ESPN as a studio production assistant in June after graduating from the University of Maryland in May. “Every night, I’m assigned a game, which I watch and then produce a highlight for each version of SportsCenter,” Burton said. “Once a week I also work with espnW collecting video for feature projects they produce. I’m very excited about the opportunities at ESPN and what my future holds at this company.”

Burton was a 2016 AWSM intern at CNN Sports in Atlanta.

“If it weren’t for that amazing opportunity and attending the AWSM convention last summer, I would not have made the connections that helped me get my job at ESPN,” she said.

Lisa Byington, a Northwestern graduate, has been with the Big Ten Network since the network began in 2007. On Sept. 16, she made history on the air. The longtime sideline reporter, studio host and play-by-play broadcaster became the first woman to be the play-by-play voice for a football game on BTN when she called the Bowling Green-at-Northwestern game.

Mary Byrne joined the Olympic Channel as its editor. She previously worked at ESPN.com.

Cristina Daglas has moved into the role of ESPN.com’s NBA deputy editor. In 2016, Daglas became the first woman to be MLB deputy editor for ESPN.com. She led ESPN’s coverage of the Chicago Cubs ending a 108-year World Series title drought and helped launch the Béisbol Experience project. She joined ESPN in 2014 as a senior editor at ESPN The Magazine, primarily focusing on the NFL. She previously was the editor of D Magazine and Milwaukee Magazine.

Rosalyn “Ros” Gold-Onwude has joined Turner Sports as a basketball analyst who calls games for NBA on TNT, Pac-12 Network, NBA TV, and the WNBA’s New York Liberty on MSG. She previously was a sideline reporter covering the Golden State Warriors and the San Francisco 49ers.

Alison Gordon, two years after her death, has become first woman honored by Canadian Baseball Hall of Fame. She was the first woman in the Baseball Writers of America in late 1970s and covered the Toronto Blue Jays. Read more in the Toronto Star.

Maggie Gray, a longtime “SI Now” host, is one of a trio replacing Mike Francesa on WFAN radio. She will team with Bart Scott, the former New York Jets linebacker, and Chris Carlin, who spent several years at WFAN and SNY. SI.com honored Gray on Dec. 8 with a tribute in the closing moments of her 1,169th and final show.

Kara Hammer is the new home rinkside reporter for the Nashville Predators on Fox Sports Tennessee.

Monique Jones has become ESPN.com’s MLB deputy editor. Jones joined ESPN in 2015 as an NFL senior editor, overseeing coverage that included the Deflategate investigation of New England Patriots player Tom Brady. Before joining ESPN, Jones was the NFL deputy editor for USA Today and the NFL editor for The Baltimore Sun. She was a reporter with The Boston Globe, The Dallas Morning News and Pensacola News Journal.

Shauntel Lowe, a senior staff editor for sports at The New York Times, and Cristina Ledra, a senior rewrite editor for NHL.com, were among the 25 participants chosen by the Poynter Institute and the National Association of Black Journalists for the Dec. 3-8 Poynter-NABJ Leadership Academy for Diversity in Digital Media, a transformational leadership program for journalists of color. Participants were emerging leaders in digital media who had demonstrated an aptitude for leadership through current projects and references. The academy included guidance on navigating newsroom culture, leadership styles, the business of journalism and entrepreneurship, as well as networking and one-on-one coaching.

Michelle Smith McDonald was named director of communications at Alameda County (Calif.) Office of Education. She previously was public information and community relations officer at Dublin (Calif.) Unified School District. A former San Francisco Chronicle sports reporter, she continues to freelance for ESPN.com and other outlets.

Lisa Matthews, a multi-media producer and reporter for the Arizona Cardinals, has been honored by Hispanic Women’s Corporation Youth Leadership Institute with its “Emerging Young Leader” award.

Gina Mizell, formerly with The Oregonian, now covers the Denver Nuggets and the NBA for the Denver Post. Mizell is an AWSM board member and a former internship/scholarship recipient.

Amy Moritz, after a lot of running, swimming, biking and training for triathlons, Ironmans and marathons, has published her first book, “I Thought You’d Be Faster The Quest To Become An Athlete.” A sportswriter at The Buffalo News for 18 years, Moritz became athlete in her 30s. The book is available at Amazon.com in paperback and Kindle versions.

Katie Nolan, formerly the host of Fox Sports 1’s Emmy-winning “Garbage Time with Katie Nolan” and a podcast by the same name, joined ESPN on Oct. 16, debuting on “SportsNation” on Oct. 25. She is expected to appear in a variety of projects on multiple studio programs and digital projects.

Samantha Pell joined The Washington Post as a high school sports reporter after completing an internship at the Dallas Morning News. A 2017 Arizona State graduate, Pell is a former ASU student chapter board member.

Samantha “Sam” Ponder is host of the new “Countdown,” ESPN’s flagship football pregame show that has a new look. She replaced Chris Berman, who hosted “Sunday NFL Countdown” from 1986 through last season. Ponder previously covered college football. She was featured on Variety.com in a Q&A about navigating pay issues as a woman in sports media.

Kathleen Ritter‏, a May Penn State graduate, started her postgraduate career in October with the Fiesta Bowl as a communications intern. She expected her duties to include assisting with press releases, guides, scripts, social media events and the games. “A big component to this internship is writing, and that has always been a big passion of mine,” she said. “I love telling stories through different angles and engaging the audience. I eventually want to work for a NHL, NFL or MLB team in media relations. I also have a big passion for philanthropy and wouldn’t mind working for a foundation for a professional team.”

Lindsay Schnell‏ has joined USA Today to cover college basketball and college football. “I’m stoked because hoops (men’s AND women’s) is my first love. I’ll be based in Portland, Ore., still,…” she said. She previously worked for Sports Illustrated covering college football and basketball, and before that she worked at The Oregonian.

Gabby‏ Urenda, a 2017 University of Oregon graduate, has joined KPIC in Roseburg, Oregon, as an on-camera reporter and multimedia journalist. She as the AWSM student chapter president at Oregon.

Jenna Willhoit, assistant director of athletics communication at the University of Dayton since 2013, the WoSIDA Woman of the Month for November. In 2017, the long-time CoSIDA group Female Athletic Media Relations Executive (FAME) rebranded and is now called WoSIDA (Women Sports Information Directors of America/Women of CoSIDA).

Molly Yanity has been elected to a two-year term as chair of the nonprofit Association for Education in Journalism and Mass Communication’s Sports Communication Interest Group. The group is made up of approximately 145 scholars committed to excellence in sports research and teaching. As chair, Yanity, who is an assistant professor of journalism and guides the AWSM student chapter at Quinnipiac University, oversees membership, promotion, conference programming and administrative duties for the group. The group also is working with the University of Nebraska Press to become the official academic group of the Journal of Sports Media. Follow the group on Twitter at @SportsAEJMC.

Are you starting a new adventure in your career or your life? Have you reached a special milestone? AWSM members would love to share in your achievements. Let us know by contacting Teri Boggess at teri.boggess@gmail.com.