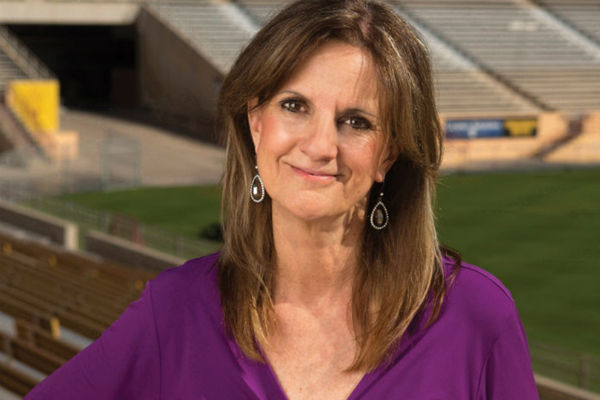 Former AWSM president Paola Boivin is one of six new members appointed to the College Football Playoff selection committee. Boivin, who worked for the Arizona Republic for more than 20 years before joining Arizona State’s Walter Cronkite School of Journalism and Mass Communication as a professor of practice, begins a three-year committee term this spring.

Kristie Ackert, who covers the Mets for the New York Daily News, was honored with the Dick Young Award for excellence in baseball reporting.

Jennifer Evans Armstrong was named sports editor of NOLA.com and the (New Orleans) Times-Picayune, where she has worked since 2001.

ESPN’s Stephania Bell is the first woman inducted into the Fantasy Sports Writers Association Hall of Fame. A physical therapist and board-certified orthopedic clinical specialist, she is one of the first writers to apply medical insight to fantasy analysis.

Doris Burke, the first woman to hold the job of full-time NBA color analyst, is the recipient of the Naismith Basketball Hall of Fames’s 2018 Curt Gowdy Award for electronic media. She joins Jackie MacMullan (won for print media in 2010) as the only women to win the award. Burke began her career as radio analyst for Providence College, where she played point guard. She then worked New York Liberty WNBA games and has been a game analyst for ABC and ESPN since 1991.

Erin Cofiell joined Hall Communications in Burlington, Vt., as a marketing consultant, video editor and occasional on-air personality. Cofiell also was recognized by the National Sports Media Association as sportscaster of the year in Vermont.

Cindy McConkey Cox, 57, one of the first female sports writers at USA Today, died after fighting a rare biliary liver cancer for more than four years. As a sports reporter at the Knoxville Journal, she became the first female reporter to cover the University of Tennessee football team.

Alicia DelGallo, an Orlando Sentinel sports reporter, was promoted to editor of prosoccerusa.com, a national site launched by the Sentinel with coverage of Major League Soccer.

Amber Dixon, sports anchor for NBC affiliate KSNV in Las Vegas, was named sportscaster of the year in Nevada by the National Sports Media Association.

Jeannine Edwards, an ESPN reporter since 1995, has retired. Edwards said she turned down a contract extension with the network to spend more time with family. Her final assignment was the Cotton Bowl.

Alison Gordon, who became the first full-time female beat reporter in major-league history when she covered the Toronto Blue Jays in 1979, has become the first female winner of the Canadian Baseball Hall of Fame’s Jack Graney Award. The award annually goes to a member of the media who has made significant contributions to baseball in Canada through their life’s work. Gordon died in 2015.

Meghan Greenwell, a former senior editor at ESPN the Magazine, has become editor-in-chief of Deadspin. She becomes the fifth chief editor and first woman to hold the position. Greenwell most recently served as executive features editor for Esquire.com.

Jemele Hill has moved to a new role as a writer for ESPN’s The Undefeated. She previously was a host on ESPN’s SC6 with Michael and Jemele.

Jenifer Langosch is taking a break from the St. Louis Cardinals beat at MLB.com to prepare to become the mom of a baby girl.

Cristina Ledra, a senior rewrite editor for NHL.com, and Shauntel Lowe, a senior staff editor for sports at the New York Times, were selected for the Poynter-NABJ Leadership Academy for Diversity in Digital Media.

Kwani Lunis, an NBC Sports Boston production assistant who is part of the AWSM Champions mentor program, has been chosen as a diversity fellow by the Associated Press Sports Editors.

Chevonne Mansfield, a former AWSM board member, has moved from the American Athletic Conference to LEAD1 Association as director of communications.

AWSM board member Meghan Montemurro joined The Athletic-Philadelphia as its Phillies beat writer. She formerly covered the Phillies for The News Journal (Wilmington, Del.).

Katie Nolan, hired from FS1, is one of the hosts chosen for ESPN’s launch of two daily SportsCenter shows on the network’s Snapchat Discover channel. Elle Duncan also appears on the Snap show.

Jessica Quiroli, who blogs about minor-league baseball, has started “All Heels on Deck,” a place for women to write about baseball.

Nicole Saavedra has accepted a position with USA Today Network-Tennessee as statewide sports planner. She was formerly sports editor at the Athens (Ga.) Banner-Herald.

Lori Shontz, a former AWSM board member and University of Oregon journalism instructor, was one of MediaShift’s list of top 20 journalism school educators.

Emma Span, a senior editor at Sports Illustrated, has joined The Athletic as managing editor of its new national baseball site.