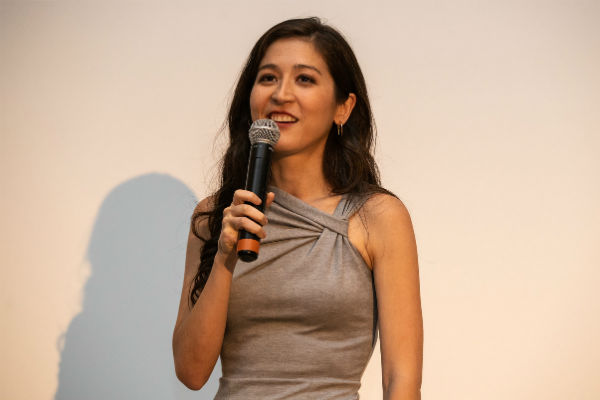 Mina Kimes was debating Domonique Foxworth on “First Take” when, during a commercial break, she made an absent-minded move many reporters make daily — one Kimes later called a fatal error. She opened Twitter.

“Amidst positive feedback, I saw something cruel, and it not only wounded me, it destroyed my confidence,” Kimes told members of the Association for Women in Sports Media at its annual convention  in Scottsdale, Ariz. “And while I powered through the rest of the show, I wasn’t as good after I read that comment. Because a random man told me I wasn’t good, and for no reason at all, a tiny part of me believed him.”

At the closing dinner of #AWSM2018, Kimes, a senior writer for ESPN the Magazine and a keynote speaker for the event, spoke about an affliction that seems to follow women in sports media — trolls on social media.

Kimes said the internet was how she switched from business reporter to sportswriter, when an ESPN The Magazine editor reached out to her after reading a personal essay on her love of football. But the internet is also where she said being a woman in sports is the most challenging.

Because online, feedback comes by the thousands. And behind the veil of a screen, users can be cruel with their criticism.

“Those people, they don’t get mad at us because of [what] we say or how we say it,” she said. “They’re mad because we’re women. That’s it. There’s no other reason.”

What can we do about it? Quitting social media is not feasible for many reporters, who use it to share information and learn from other journalists, but neither is bearing the flood of incessant insults. At least, not alone.

“I remind myself daily, I’m good at this because of who I am, not in spite of it,” she said. “I dunk on a lot of guys, but I mute a lot of guys, too. I talk to other women, a lot, because it’s helpful to be reminded that you aren’t the only one being treated this way, and it has nothing to do with you.

Kimes said when she was a business reporter, another male-dominated sector of journalism, she frequently was asked, “Is it hard being a woman in your field?”

“In response, I would always say this: ‘Yes, it can be hard, because sometimes other people make it hard,’ Kimes said. “But it’s also a huge advantage, and not just because we women at practices don’t have to wait a long time for the bathroom."

“It’s an advantage because the rarest thing in journalism, in any field of journalism, but especially sports, is originality, and we’re born with it. Because our experiences are unique, our thoughts and perspectives are unique, too. Being a woman in sports is not a challenge. It’s an edge.”