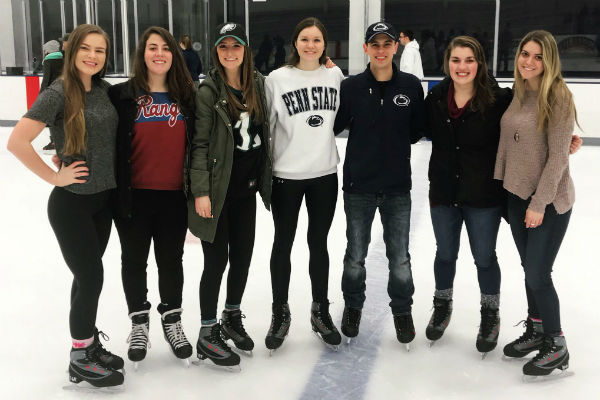 The Association for Women in Sports Media has selected Penn State as its 2018 student chapter of the year.

The Penn State student chapter is led by president Katie Kemmerer, vice president Jill Beckman, secretary Madeleine Balestrier and treasurer Alissa Devine. John Affleck, the Knight Chair in Sports Journalism and Society at the university’s Bellisario College of Communications, serves as the chapter advisor. Founded in 2013, this is the first win for Penn State’s chapter.

“AWSM is happy to honor Penn State as our chapter of the year,” said Katie McInerney, AWSM’s vice president of student programs. “This group serves as a model for what our student chapters can accomplish. The young women in charge have been organized, consistent and ambitious, and the depth of programming is impressive.”

In addition to regular meetings, Penn State hosted eight speaker events and co-hosted two others and had group outings ranging from volunteering with ESPN’s College GameDay to ice skating to pumpkin picking. The chapter also organized a weekend outing to Pittsburgh – and included members of the West Virginia student chapter – to meet with executives from the Steelers and Heinz Field, a college SID and journalists from the Pittsburgh Post-Gazette and the Incline.

“Our chapter embodies the mission of the entire organization,” Kemmerer said. “We understand it’s not just about taking that first step to recruit members at involvement fairs; it’s crucial to have a steady engagement throughout the year and garner interest to the members can benefit by coming to meetings and events. We’ve widened our umbrella to accommodate students beyond just communications, but also public relations, marketing and business through various partnered events and speakers. Our chapter continues to evolve into a welcoming and inclusive environment for women to learn from one another, gain skills they will use for life and expand their professional network.”

The student chapter at Quinnipiac was chosen as runner-up for chapter of the year. Some highlights of Quinnipiac’s programming included a screening of “Let Them Wear Towels” and discussion with sports media pioneer Robin Herman, trips to New York where members met with Madison Square Garden and Bleacher Report staffers, hosting a panel at the Associated Press Sports Editors’ regional meeting and a workshop with NESN executives. AWSM’s board also was impressed by Quinnipiac’s membership – which is the largest of any AWSM student chapter despite having fewer than 10,000 students on campus.