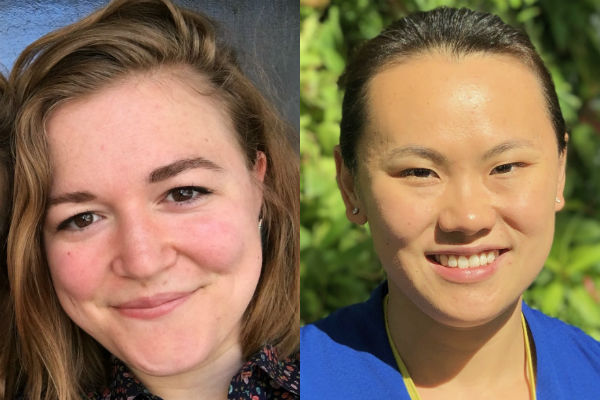 Rachel Bowers and Stefanie Loh are now in leadership roles at the Boston Globe and the Seattle Times, respectively.

Bowers became assistant sports editor of the Globe in July, while Loh began her tenure as assistant sports editor at the Times on July 1. Bowers was a sports producer at the Globe for four years and Loh covered Washington State football at the Times. Loh is the current Football Writers Association of America first vice president and a former AWSM president (2013-2014). Outsports.com recently featured Loh and Bowers, who are members of the LGBT community, for earning leadership roles in their newsrooms.

Elizabeth Bloom will pursue a joint degree at Harvard University’s Business School and the John F. Kennedy School of Government. Bloom was a reporter for five years at the Pittsburgh Post-Gazette, including 2018 as a beat writer covering the Pittsburgh Pirates.

Rana Cash becomes the sports editor of the Louisville Courier-Journal on Oct. 1. Cash is currently the Minnesota Vikings and Minnesota Lynx editor at the Minneapolis Star-Tribune.

Mary Clarke is now managing editor/lead writer of L.A. Valiant Wire, which covers the California-based franchise of the Overwatch League, a professional eSports league. Clarke was previously with SBNation.com.

CBS has named Jamie Erdahl as its lead sideline reporter for “SEC on CBS,” the network’s coverage of SEC football. Erdahl has worked as a reporter on NFL and college basketball telecasts with CBS since 2014. Erdahl is a former AWSM internship/scholarship winner (2011) and was a panelist at the 2017 AWSM Convention in Austin, Texas.

Lindsay Jones joins The Athletic as an NFL features writer based in Denver from USA TODAY, where she covered the NFL.

Katie Kemmerer is a community outreach seasonal assistant with the Kansas City Chiefs. Kemmerer is a 2018 Penn State graduate and was the AWSM@PSU chapter president for the 2017-2018 school year.

Maddie Lee moves to the Jackson (Miss.) Clarion-Ledger to cover Ole Miss from the Salt Lake Tribune, where she covered Major League Soccer. Lee is a 2016 AWSM internship/scholarship recipient.

Laken Litman joins Sports Illustrated, where she will cover college football. Litman covered Notre Dame for the Indianapolis Star the last two years. She is a former AWSM board member and a 2010 AWSM internship/scholarship recipient.

Brooke Pryor has joined the Kansas City Star to cover the Kansas City Chiefs after two years of covering Oklahoma University athletics for The Oklahoman. Pryor is a 2013 AWSM internship/scholarship recipient and a former AWSM board member.

Jorge Rojas is now managing editor of The Athletic Miami. Rojas was previously the sports editor of the Miami Herald.

Audrey Snyder has joined The Athletic, where she will continue to cover Penn State football. Snyder was previously at DKPittsburghSports.com. Snyder is a 2011 AWSM internship/scholarship recipient and is the professional adviser for AWSM’s student chapter at Penn State.

Graham Watson-Ringo became the managing editor of the Rivard Report, a nonprofit, online-based news organization based in San Antonio. Watson-Ringo was previously the executive producer of digital subscriber properties at the San Antonio Express-News.

Leah Vann became the sports editor of the Steamboat Pilot and Today in Steamboat Springs, Colo., in June. Vann was previously a sports reporter at the Globe-Gazette in Mason City, Iowa, where she covered high schools, hockey and auto racing.

Lisa Wilson joins The Athletic NFL as its managing editor. Wilson spent the last year as the sports editor of ESPN’s The Undefeated and was previously executive sports editor at The Buffalo News.

Are you starting a new adventure in your career or in your life? Have you reached a special milestone? AWSM members would love to share your achievements. Contact Rachel Lenzi, VP/Membership at lenzigallagher@gmail.com.