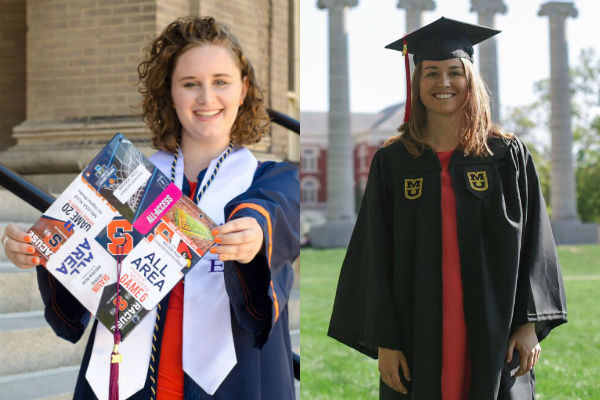 Two of the nine 2018 AWSM Scholars have landed full-time jobs ahead of graduation this month.

Anne Rogers has joined the the staff of MLB.com to cover the St. Louis Cardinals after graduating from the University of Missouri. She spent last summer covering the Colorado Rockies, and was welcomed back to her new role on May 25.

Melissa Rule will return to ESPN as a production assistant after graduating from Syracuse University. Rule interned in Bristol in summer 2018.

Julia Poe, who interned at Sports Illustrated last year, will graduate from the University of Southern California and move to Washington to intern at the Seattle Times.

Among our 2017 AWSM Scholars who are also on the move is Alaina Getzenberg. She joined The Dallas Morning News as a sports digital producer. She previously worked at CBS Sports and was an AWSM scholar in 2017, interning with MLB.com. In Dallas, she will be writing, editing and creating social media content for the newspaper.

***
‍Joey Chandler will join the staff at the Wilmington (N.C.) Star-News, where she will cover college sports and higher education. Chandler previously covered high school sports for five years at the Tuscaloosa (Ala.) News.

***
Tracy Greer joined The Athletic in March 2019 as an editor on the universal desk. She and the universal desk team handle copy editing and web production for all sports on nights and weekends. She had spent the last 11 years working on the news side and is happy to return to sports. Greer is also an instructor at Arizona State University's Cronkite School. Greer is a former AWSM board member.

***
Leba Hertz retired in February from the San Francisco Chronicle, where she was the arts and entertainment editor, and the Sunday Datebook editor. Hertz is a former AWSM board member.

Sarah Kezele joined USA Today’s Sports Media Group as a video host. Kezele is a membership coordinator on the AWSM board.

Andrea Kremer will be honored May 21 as a Gracie Award recipient for her work with Amazon Prime’s NFL Thursday night coverage. The Alliance for Women in Media Foundation will present Kremer and Hannah Storm with the Ceiling Breakers Award for sports on-air talent at the 44th annual Gracie Awards on May 21 in Los Angeles. Kremer and Storm became the first female broadcast duo to call an NFL game, and commentated on 11 games in Amazon Prime’s Thursday Night Football coverage. Kremer will also serve as the opening-night speaker for AWSM's 2019 annual convention in Tampa.

Megan Linehan joined the Athletic as a soccer editor, and will cover the U.S. women’s national team, the National Women’s Soccer League and other women’s soccer stories. She will cover the 2019 FIFA Women’s World Cup this summer. Linehan was previously a senior content manager with NWSL Media.

“The goal is to provide consistent and thoughtful coverage of the USWNT and NWSL, thanks to my position that doesn't exist at any other major sports outlet,” Linehan said.

Chevonne Mansfield will join Georgetown University as an adjunct professor in the Master in Professional Studies Sports Industry Management program. Mansfield will teach first class of Sports Sales, Sponsorship and Revenue Development this summer. Later this fall, she will teach an Intercollegiate Athletics Administration course. She is the director of communications for LEAD1 Association, and she is a former AWSM board member.

Tess Quinlan has been promoted to manager of NBC Sports Digital Content. In her new role, Quinlan will have primary oversight of the content on NBCSports.com and will serve as a key point of contact for content distribution across NBC Sports’ digital properties. She will also oversee the sports desk and the newly developed team of Digital-Linear embeds.

Alexa Tieu married Chris Whippo in April in California. Whippo is an on-air promotions producer, editor and graphic designer for FOX Sports Arizona, and she is an AWSM board member.

Molly Yanity earned tenure at Quinnipiac University in Hamden, Conn., and was promoted to associate professor effective in August. This summer, she will cover the Connecticut Sun for The Athletic and plans to research the coverage of embattled female coaches. Yanity is the faculty advisor for the AWSM student chapter at Quinnipiac.